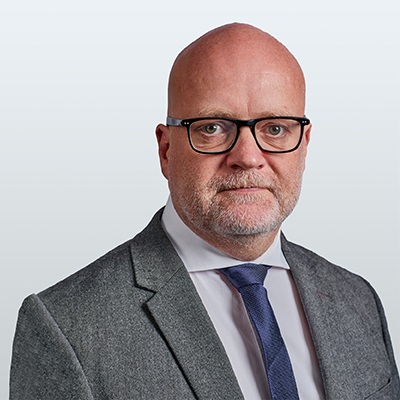 Jaime Hamilton was appointed a QC in 2019. He has practised at 9 St John Street since the beginning of his second six of pupillage. He has been a pupil supervisor to three pupils and is now the Deputy Head of Chambers.

Throughout his career he has undertaken both prosecution and defence instructions. Jaime has acquired a reputation as a calm, concise and eloquent advocate, qualities which have led to him taking Silk.

In recent years he has acted as leading junior and led junior in a wide range of cases on both sides of the courtroom. As can be seen from his CV below, he has conducted cases involving homicide, drugs, serious and organised crime, firearms and fraud.

Over time he developed a practice whereby he was frequently instructed in cases of serious sexual offending, where he excelled in the focussed and sympathetic cross-examination of vulnerable witnesses. This particular area of practice has led to him provide training and lectures to the world renowned forensic expert courses provided by St Mary's Sexual Assault Referral Clinic.

Another area of repeated defence instructions is in cases with substantial Proceeds of Crime  elements, usually fraud or drugs. He has been instructed in the High Court on enforcement proceedings. Within the complexities of confiscation he will endeavour to find a simple way to navigate through.

His practical use of the law, demonstrated by his conduct of Proceeds of Crime Act cases, is further illustrated by his appearances in the Court of Appeal where he is often complimented for the clarity of his submissions. He has dealt with appeals concerning fresh evidence, Serious and Organised Crime Prevention Orders and renewed applications for leave.

Due to his extensive experience of cases involving serious and organised criminal conspiracies he is particularly adept at dealing with disclosure and PII issues.

Appearing both as an advocate and an expert witness in the General Medical Council, Jaime has experience of professional discipline. He has represented police officers charged with criminal offences. He has also appeared in numerous cases relating to fraudulent activity prosecuted by authorised regulatory bodies.

Jaime Hamilton QC clerks will provide no obligation quotations for all legal services that he offers. Jaime Hamilton QC accepts instructions on legal aid rates where those are available, details of which can be found here.  For other work, Jaime Hamilton QC usually charges a brief fee plus refresher fees for court hearings, with advisory, conference and other preparation work charged at an hourly rate. Jaime Hamilton QC aims to return paperwork within 14-21 working days, however his professional commitments, complexity and volume of documentation can affect these approximate timescales.

Jaime has been actively involved in life on the Northern Circuit, having been both Junior and Secretary. He has been particularly involved in advancing the cause of both sides of the profession in relation to publicly funded work. This has seen him provide assistance whenever called upon by either the Circuit or the CBA.

He is also otherwise known as "View From the North" due to his blog about legal matters and his presence on Twitter. He has been quoted in The Times on issues he has covered in his blog. He has provided advice to television production companies and writers about issues relating to the law and crime in general.

Given his reputation for public speaking he has addressed meetings of both solicitors and barristers about funding and has provided lectures and seminars across a variety of topics. He has also delivered after dinner speeches to regional law societies and other organisations.

Crime (Northern Bar): Leading Silk
"He is extremely conscientious, and a calm and focused advocate." "He is very thoughtful and works hard. He prepares very well thought-out submissions and skeleton arguments."

Crime (Northern Bar): Leading Silk
"He is just splendid - extremely hard-working, conscientious, and he has great clarity of thought. He is strategically clear and he presents his cases forcefully."

Crime – Northern (Bar): Leading Barrister (Band 2)
"A very good prosecutor; very fair and has very sound judgement."
"He has a very calm and knowledgeable manner in court and you would be in safe hands with him."

“A skilled and powerful advocate”