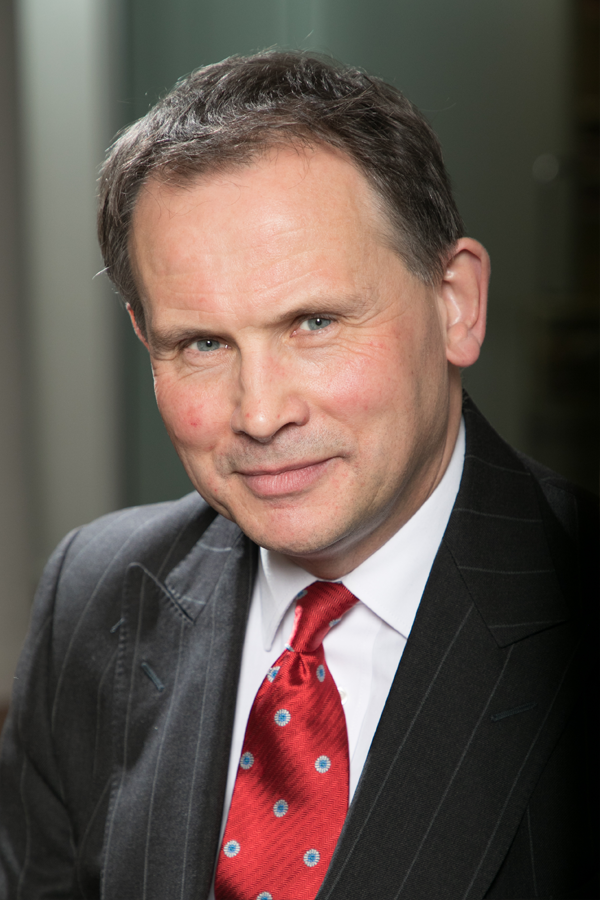 Hugely experienced yet extremely approachable, Gordon Hennell is a formidable jury advocate, who brings great expertise and enthusiasm to every case he prosecutes or defends.

Awarded the Prince Lee Scholarship to read History at Trinity College, Cambridge, he served as President of the College Students' Union, before changing to read Law.

He began his legal career at 43 King Street, Manchester before moving with those Chambers in the early 1990s to 5 John Dalton Street, Manchester. He developed a substantial Defence practice in Chester and North Wales and in 1995/6 acted as Defence Junior in a series of lengthy historical sex abuse trials concerning events at a children’s home in Congleton.

In 2001 he joined 22 Nicholas Street (now Linenhall Chambers) in Chester and practised principally on the Wales and Chester Circuit until 2014. After prosecuting Miss Nicola Gatto in a child sex abuse trial at Warrington Crown Court, he was invited to apply to 9 St John Street, and joined Chambers in December 2014.

Gordon Hennell has prosecuted and defended all types of serious crime including Murder (with and without a leader), Manslaughter, Causing Explosions likely to Endanger Life, large scale Drugs Conspiracies, Armed Robbery, Rape and Fraud. He has appeared at Courts throughout England and Wales from Carlisle and Caernarfon to Exeter and Canterbury.

Successfully applied at a preliminary hearing for the Court to dismiss a Conspiracy to Murder Charge against a young man in his 20s on an insufficiency of evidence and then at the subsequent trial ,secured his acquittal at the close of the Crown’s case to Conspiracy to inflict GBH with intent. All but one of his fellow co accused were subsequently convicted by the jury and received lengthy custodial sentences.

Dissuaded an "old lag" from "pleading to everything" just to "get the case sorted" because ,on his instructions ,whatever else he had done he was Not Guilty of the alleged Burglary of a dwelling which, if admitted ,was bound to result in a 3 year mandatory minimum prison sentence. The Crown refused to accept his mixed pleas and insisted on the case being adjourned for trial. After months of sustained pressure from instructing solicitors at Mr Hennell’s direction, the CPS eventually accepted his pleas shortly before trial and he received a Community Sentence.

Secured the acquittal of a vulnerable adult with special needs falsely accused of a historical offence of Rape. In panic he denied the allegation to the police on the basis that there was no sexual contact of any kind , however forensic cross examination of the complainant and a friend she called in support, revealed the truth that sexual intercourse had taken place, but WITH her consent!

Successfully persuaded the Court to give the Defendant Suspended prison sentences for a historical Drugs supply offence and a Fail Surrender matter both committed in 2009 following which he’d jumped bail and absconded to Malta, only returning to face the music ,exactly ten years later ,in 2019.

Represented a middle aged man falsely accused of the most horrific sexual abuse by his three sons in the wake of a marital break up. Detailed but delicate age appropriate cross examination of the two younger boys aged 9 and 10 via an intermediary plus very robust questioning of their older brother and the Mother ,revealed the truth of the matter and he was unanimously acquitted on all counts.

Successfully prosecuted at trial a man of a knifepoint Robbery following which he received an immediate sentence of 5 year’s imprisonment. See Bolton News 3/10/19. "Knife man who committed 106 crimes is jailed after threatening to “shank” security guard".

Represented a 15 year old youth accused of a series of historical Rapes of a girl of 6 when he was aged 13/14. After the Court’s rejection of a lengthy and detailed Abuse of Process argument based on prosecution delay Mr Hennell negotiated with the Crown a proposed plea to one of the rape offences . The Defendant ,in the company of his Mother and a close friend ,confessed to this in conference and later pleaded guilty. At the ultimate sentence hearing before the Crown Court ,when he had turned 16 , the learned judge was persuaded to make him subject to a rigorous 2 year Youth Rehabilitation Order rather than imposing an immediate and substantial custodial sentence.

Prosecuted a 16 year old youth accused of serious sexual offences against an 8 year old girl who was aged 9 at the date of trial. Mr Hennell advised closely as to the charges to be pursued at trial and the admissibility and inadmissibility of certain pieces of evidence. The Defendant was tried and convicted.

Successfully persuaded the sentencing judge to wholly suspend the inevitable prison sentence on a man in his 60s who’d earlier pleaded guilty ,to the serious and sustained historic sexual abuse of a young girl ,when he was aged in his 20s.

Defended during a lengthy trial on an extremely serious Conspiracy to Rob charge a career criminal who’d admitted in the same proceedings very substantial involvement in Conspiracies to Burgle and Steal goods to a total value of over £1.5 million . The Defendant ,who on counsel’s advice neither gave nor called evidence BUT again on advice did put his character “in”, was acquitted by the jury while all his co accused facing the same charge either pleaded guilty or were convicted. When the gang were sentenced Bowers got 9 years imprisonment while all those convicted after trial of the Conspiracy to Rob matter received sentences of 14 years imprisonment with a 2 year extension. See Manchester Evening News 12/2/20. "Ruthless Burglary Gang".

Represented a man in his 20s who pleaded guilty to Causing Death by Dangerous Driving by knocking down a 14 year old cyclist and was jailed for 4 years . See Daily Mail 12/6/20 "Father stumbles on paramedics trying to save his son’s life".  The Sun 12/6/20. "Worst Nightmare. Father finds medics treating dying boy".

Defended a young woman due to plead guilty to perverting the course of justice, by making a false allegation of marital rape. Mr Hennell ascertained in conference that she had been raped and so advised an ouster application re the husband plus a further police interview, in which she admitted false retraction, to which she pleaded. Subsequently secured a Court of Appeal hearing and the substitution of a community order, within 18 days of a Crown Court sentence of immediate imprisonment. See Daily Mail 24/11/10. "Free. Wife jailed for dropping her rape claim that was true".

Secured the jury acquittal ,in just over an hour ,of a man in his 30s accused of a serious Sexual Assault against an 11 year old girl. Following very careful age appropriate cross examination it was revealed that despite its immediacy the girl’s complaint was inherently unreliable and most probably the result of a dream.

Successfully represented ten Appellants in overturning a series of ASBOS in what has become one of the leading cases on the necessity for and the ambit of, what are now Criminal Behaviour Orders.

Successfully defended a serving prisoner on a charge of Escape from Lawful Custody on the grounds of duress after he’d jumped the dock and run out of the very same court room, some nine months before! See Shropshire Star 17/6/14. "Burglar cleared of Shrewsbury court escape bid because he feared for his life".

Prosecuted at trial the former Coronation St actor for Dangerous Driving. Mr Jones later changed his plea to Guilty and was given a Community Sentence. See BBC 18/3/10. Les Battersby actor "tried to end it all in Mercedes". Daily Mail 19/3/10. "Corrie actor tried to kill himself".

Secured the acquittal of the alleged UK organiser or 'Ringmaster' of a conspiracy to evade excise duty of £2 million on imported cigarettes, in which his phones were at the centre of a damning prosecution document showing numerous calls between the importer (his co-defendant who was convicted), the various small fry (who all pleaded guilty) and him. Mr Hennell countered this by producing a defence document in the exact same format, detailing others who had access to his phones and so could have made the calls concerned.

Defended during an 8 week trial, the First Defendant and alleged Ring leader of a multi handler Drugs Conspiracy case, involving the supply and distribution of illegal drugs from Manchester and elsewhere, into Teesside. See Teesside Live 7/6/18. "The leading players in £1m drugs ring".

Successfully defended a very elderly man after a lengthy trial, who had been accused of numerous offences of Historic Sex Abuse against his two now adult daughters, when they were children.

Secured the acquittal after trial on a Wounding with Intent charge on the grounds of reasonable self-defence, of a man who’d taken another man’s eye out with a machete. See North Wales Live 18/2/16. "Gwynedd Machete attack accused claims actions were self defence".

Defended a teenager who lost control of his car and killed a blameless pedestrian but who refused to accept any culpability. Mr Hennell opened the defence case to the jury successfully inviting them (despite the client’s reluctance and much judicial opposition) to convict of simple careless driving.

Prosecuted a multi handed armed robbery, in which the principal defendant (in support of an alibi) deliberately got himself caught on a shop CCTV near his home, before being driven several miles at high speed on camera free back roads to rob a Post Office. Detailed study of the locality (including driving all the various possible routes) and precise analysis and presentation of the camera footage available, secured convictions all round.

Gordon is a practising barrister, regulated by the Bar Standards Board. Details of information held by the BSB about Gordon can be found here.

Gordon's clerks will provide no obligation quotations for all legal services that he offers. Gordon accepts instructions on legal aid rates where those are available, details of which can be found here. For other work, Gordon usually charges a brief fee plus refresher fees for court hearings, with advisory, conference and other preparation work charged at an hourly rate. Gordon aims to return paperwork within 14 working days, however his professional commitments, complexity and volume of documentation can affect these approximate timescales.