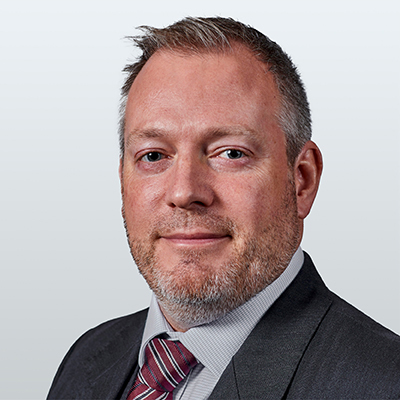 Russell practices exclusively in the field of personal injury work, representing both Claimants and Defendants in cases involving significant injuries following accidents in the workplace, public liability disputes and serious road traffic accidents. He has a particular interest in cases involving serious limb injuries, particularly those involving mobility issues and the ability to return to work. His work in the area of insurance fraud includes advising in cases involving allegations of exaggeration/malingering and complex medical issues such chronic pain conditions and psychiatric conditions such as somatic symptom disorders.

Russell has developed a significant depth of expertise and experience in personal injury work over the years. He is regularly instructed to advise on expert evidence and is very experienced in dealing with experts in conference and at trial. He is regularly instructed for Joint Settlement Meetings and to advise in relation to negotiation and settlement tactics more generally. He also continues to attend court on a regular basis, for case management and at trial, which gives him an invaluable insight into the current court approach to various issues. He is regularly instructed for Costs and Case Management Hearings and is very experienced in dealing with contentious directions and disputes over costs budgets.

Russell is often instructed in contentious and high value proceedings involving significant disputes of fact and/or complex medical causation issues, including in cases involving the suspicion of exaggeration and malingering and the use of covert surveillance evidence. His usual caseload is Multi-Track cases with a value of £100,000 to £1.5 million but he also has experience of being led in very high value cases.

With a background in economics and finance, (including a stint working in the City in corporate finance), Russell is adept at working with figures and is regularly instructed to draft Schedules of Loss and Counter Schedules. He combines a friendly and approachable manner with a keen eye for detail and appreciation of commercial considerations, which is regarded as a key asset by his clients. He is regularly complimented on his ability to "get on" with his lay clients and to work within a team to secure the best possible outcome. This approach has led to regular instructions from a broad range of loyal clients, including many of the country's leading insurers, local authorities and national firms of solicitors.

As part of his commitment to developing solid working relationships, Russell often provides seminars to his solicitor and insurer clients.

Russell is a practising barrister, who is regulated by the Bar Standards Board. Details of information held by the BSB about Russell can be found here.

Russell’s clerks will happily provide no obligation quotations for all legal services that he provides. Their contact details can be found here. It is most common for Russell to undertake Court work on either a fixed fee or a brief fee plus additional refresher days basis. For advisory work, drafting and conferences it is most common for this to be charged at an hourly rate although fixed fees are available. Conditional Fee Agreements will be considered in cases with favourable prospects of success. Russell will typically return paperwork within 21 days, however professional commitments, complexity and volume of documentation can affect these approximate timescales.