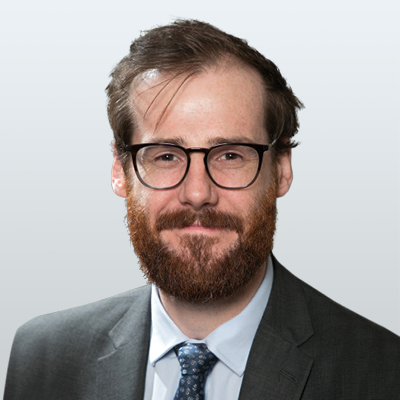 William has developed a busy practice in the field of personal injury. He has experience of advising and representing both Claimants and Defendants in cases involving a wide range of legal issues, including:

William's practice is predominantly focused upon insurance fraud litigation. Since the inception of his practice in 2008, William has gained an in-depth understanding of how fraud cases should be conducted. William has experience in representing clients in all manner of hearings, including in multi-day multi-track fraud trials. He believes that thorough preparation is the key to success in fraud cases, and enjoys working closely with his Instructing Solicitors at an early stage to consider the tactical requirements necessary to best deal with these cases. He is happy to provide seminars and training on issues relating to fraud cases.

William has developed a growing practice in the field of personal injuries sustained abroad, at sea and in the air. He receives regular instructions in relation to claims in which jurisdictional challenges have been raised, as well as cases engaging the Brussels I (recast) and Rome II Regulations. He regularly advises on issues relating to these topics as well as the Package Travel Regulations, holiday claims (including gastric illness), local standards, and foreign road traffic accidents. A growing number of his recent instructions involve claims with a foreign element in which fraud concerns have arisen.

William also has experience in representing interested parties at inquests. In 2010 he was led by Christopher Kennedy QC in the high profile inquest concerning the deaths arising out of the Dreamspace incident which occurred in Chester Le Street in July 2006.

William prides himself on providing high quality drafting and advisory work within the time frame required by his Instructing Solicitors.

William has delivered seminars in a number of areas of personal injury law and is happy to do so upon request. He enjoys meeting his Instructing Solicitors face-to-face to discuss their areas of practice and interest.

Snapshot of cases of interest:

William Hamilton is a practising barrister, who is regulated by the Bar Standards Board. Details of information held by the BSB about Mr Hamilton can be found here.

William’s clerks will happily provide no obligation quotations for all legal services that he provides. Their contact details can be found here. It is most common for William to undertake Court work for a fixed fee or a brief fee plus additional refresher days. For advisory work, paperwork and conferences it is most commonly charged at an hourly rate although fixed fees are available. Conditional Fee Agreements and Damages Based Agreements will be considered in cases with favourable prospects of success. William will typically return paperwork within 14 days, however professional commitments, complexity and volume of documentation can affect these approximate timescales.