54 Solicitors, Members of Chambers and Clerks enjoyed an excellent days golf at Bolton Golf Club. The Texas Scramble event was won by Chris Kennedy QC and his team. Pictured below from left to right are Chris Kennedy QC, David Spencer (Berrymans Lace Mawer), Martin Fairhurst (Norwich Union) and Bernard O'Brien (St James Place Wealth Management). The runners-up were the team led by Junior Civil Clerk Peadar McKinstry consisting of Stuart Neilson & Gary Anderson (McGrigors) and Andrew Mullen (Lockett Loveday McMahon). The longest drive competition was won by Paul Radcliffe and the nearest the pin competition was won by Ian Sibbald (ESURE). Chambers would like to thank all who attended. The event raised £1350 for the Nine Lives Community Foundation Charity. 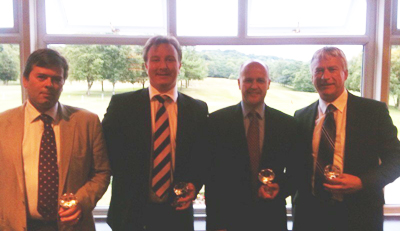 Chambers has a vacancy for a Civil Diary Manager. The successful candidate will be joining a team of 3 clerks looking after the interests of the Personal Injury and Insurance Fraud Teams.
9SJS Employment Team is the number 1 ranked leading set for Employment Law in the Northwest and is nationally recognised for the skill and expertise of its practitioners. The ongoing success of the team is reflected in the quality of instructions and diversity of our client base.
The case concerned 66 serious allegations of disability related harassment involving a number of NHS staff spread over 3 years.