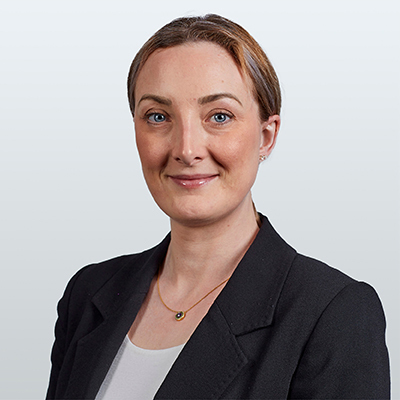 A Leader v The Borough Council of Bolton (UKEAT/0231/15/RN) – two preliminary appeals and one full appeal on several grounds, most notably whether the Judge at first instance ought to have reconsidered his Judgment on disability.

The Royal Bank of Scotland v Mr P O’Doherty (UKEAT/0307/14/RN) – an appeal on several grounds including issues of recoupment notices, half-pay sickness absence and the re-opening of a liability decision on Polkey and contributory fault via applications for reconsideration.

Amy has experience in:

Amy has a particular interest in discrimination cases, most particularly in sex and disability discrimination claims. She has also represented clients in employment cases in the County Court, with the result that she has experience of both Tribunal and County Court procedure. Amy regularly advises on all aspects of employment litigation including appeals.

Prior to starting pupillage, Amy worked for the Law Commission in the Commercial and Common Law Team specialising in consumer and insurance law. She has also represented clients for FRU and the Bar Pro Bono Unit. In addition, whilst completing the BPTC Amy set up and ran an employment law, pro bono advisory service.

Amy has co-authored two papers which were published in the New Law Journal on consumer law. She has also co-written a paper on the development of insurance law, which was later presented in a seminar. Amy regularly provides seminars and workshops for legal and non-legal clients. She has appeared in mock tribunals in order to provide both an insight into how the Tribunal system works and tactical approaches to Tribunal litigation.

In her spare time Amy is a volunteer advanced first aider for St John Ambulance.

Amy Smith is a practising barrister who is regulated by the Bar Standards Board. Details of information held by the BSB about Amy can be found here.

Amy's clerks will happily provide no obligation quotations for all legal services that she provides. Their contact details can be found here. It is most common for Amy to undertake Tribunal work for a brief fee plus additional refresher days. For advisory work, paperwork and conferences it is most commonly charged at an hourly rate, although fixed fees may be available depending on the circumstances. Amy will typically return paperwork within 7-14 days, however professional commitments, complexity and volume of documentation can affect these approximate timescales.

Employment (Northern Bar):
"She is a very good opponent." "She is one to watch for the future."

Employment (Northern Bar):
"She is knowledgeable, thorough and easy to work with."

"Strengths - extremely thorough and well prepared; clear and articulate in presenting a case; approachable, personable and can build trust with a client very quickly."

Employment – Northern (Bar): Up and Coming
"She's good with complex cases and great at putting a witness at ease."

Employment – ranked Tier 1
“Pragmatic and commercial in her advice.”

'Incisive and quick on her feet.'